By Jodi Nelson
Posted September 4, 2016
In Optical Blog
Can we have your attention please…(drum roll)…RAY-BAN!2016-09-042019-09-06https://www.relfeyecare.com/wp-content/uploads/relf-eyecare-logo.pngRelf EyeCare Specialists: Eye Doctors in Duluth-Hermantown MNhttps://www.relfeyecare.com/wp-content/uploads/rayban-red.png200px200px

Relf Optical is very excited to announce the addition of RAY-BAN frames to our collection! This week I’d like to share some history about this iconic brand. Ray-Ban has an undeniable imprint on our culture; but let’s back the truck up and start at the beginning.

In the 1930s, as airplanes allowed people to fly higher and farther, pilots started to experience headaches and air sickness from the glare off the sun. Lieutenant General John MacCready of the US Army Air Corps commissioned Bausch & Lomb, a Rochester, New York-based medical equipment manufacturer, to create aviation sunglasses to help reduce the glare, and a new brand of sunglasses was born!

The original  sunglasses featured a plastic frame, but they were remodeled a year later with a metal frame and rebranded as the “Ray-Ban Aviator”. Predictably, it wasn’t long before their popularity spread beyond pilots to anyone with an outdoorsy lifestyle. During World War II, Air Force pilots continued to rely on Ray-Ban, and they answered the call with new developments and innovations in their lenses.

Although these products were originally designed for military use, they also resonated with civilians who wanted to benefit from the same advantages the pros had. Ray-Ban effectively made the jump from military functionality to pop culture fashion in the 1950s during the Hollywood Glam era after WWII.

Hollywood‘s increasingly significant voice in what the masses wore were answered by Ray-Ban with the launch of the “Wayfarer” model. Once screen legends like James Dean and Audrey Hepburn donned Wayfarer sunglasses in their movies, they became one of the most instantly recognizable fashion accessories ever!

Further product expansion and technical innovation was the name of the game during the 1970s. Some technical innovations included super cool mountaineering glasses with mirrored lenses and leather side shields developed to reflect glare and protect the eyes from sun and wind. They also expanded its offerings to include prescription eyewear along with the sunglasses. 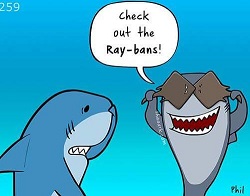 The 1980s showcased the Wayfarer sunglasses in some iconic movies including “The Blues Brothers” and “Risky Business”, while Michael Jackson cemented his signature look at the 1984 Grammys in his Ray-Ban Aviators.  And while we are on the subject of Ray-Ban Aviators, one cannot overlook one of the biggest heartthrob movies of all time, Top Gun (…sigh…).  The sunglasses continued to be the go-to choice throughout the 90s also, in movies like “Malcom X”, “Reservoir Dogs” and “Men in Black”.

They continued to update the classics and increase their social media and online presence in 2011 with the NEVER HIDE campaign. As one of the leading digital events to date, visitors were photographed and streamed live at www.Ray-Ban.com while performing at the NEVER HIDE event locations worldwide.  Fans could share their photos with friends on the website and on their social network fan pages, which resulted in reaching over 10 million Facebook users!!!

Even though, their origin lies in a technological response to a challenge facing pilots over 75 years ago, Ray-Ban continues to embrace technology as it develops new models for the future. Through every decade of its existence, they have shaped popular culture, and even now, 75 years after the first pairs of Aviators helped US pilots, Ray-Ban remains an enduring classic.

Stop by Relf Optical today to check out our new collection! We can’t wait to see you!